Ford and other companies say the industry overestimated the arrival of autonomous vehicles, which still struggle to anticipate what other drivers and pedestrians will do. 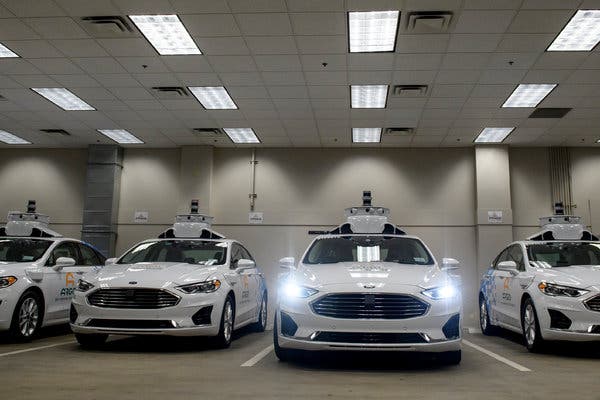 Argo AI’s self-driving technology will be used by Ford and Volkswagen in ride-sharing services. Credit Jeff Swensen for The New York Times

A year ago, Detroit and Silicon Valley had visions of putting thousands of self-driving taxis on the road in 2019, ushering in an age of driverless cars.

Most of those cars have yet to arrive — and it is likely to be years before they do. Several carmakers and technology companies have concluded that making autonomous vehicles is going to be harder, slower and costlier than they thought.

“We overestimated the arrival of autonomous vehicles,” Ford’s chief executive, Jim Hackett, said at the Detroit Economic Club in April.

In the most recent sign of the scramble to regroup, Ford and Volkswagen said Friday that they were teaming up to tackle the self-driving challenge.

The two automakers plan to use autonomous-vehicle technology from a Pittsburgh start-up, Argo AI, in ride-sharing services in a few urban zones as early as 2021. But Argo’s chief executive, Bryan Salesky, said the industry’s bigger promise of creating driverless cars that could go anywhere was “way in the future.”

He and others attribute the delay to something as obvious as it is stubborn: human behavior.

Researchers at Argo say the cars they are testing in Pittsburgh and Miami have to navigate unexpected situations every day. Recently, one of the company’s cars encountered a bicyclist riding the wrong way down a busy street between other vehicles. Another Argo test car came across a street sweeper that suddenly turned a giant circle in an intersection, touching all four corners and crossing lanes of traffic that had the green light. 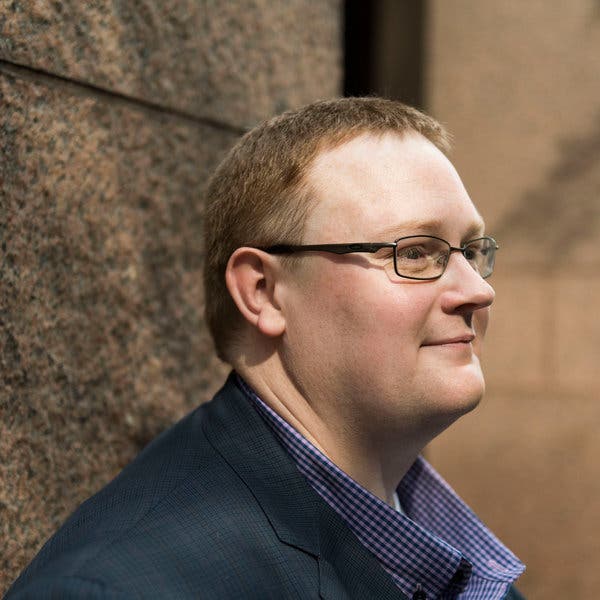 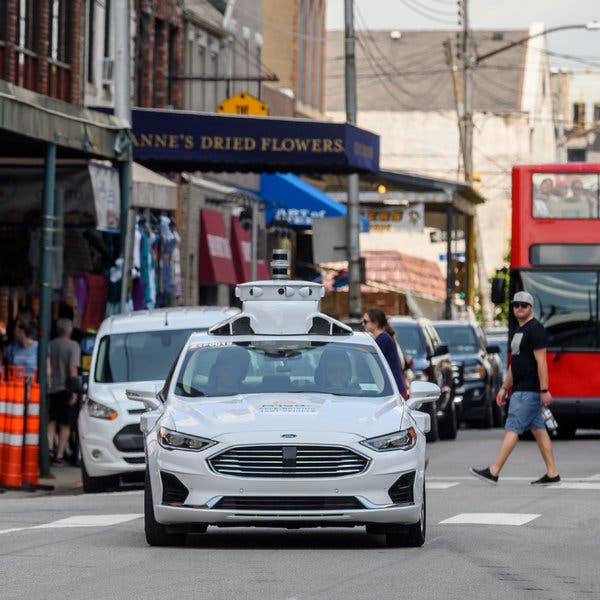 An Argo vehicle in Pittsburgh. The company is also testing its cars in Miami. Credit Jeff Swensen for The New York Times

“You see all kinds of crazy things on the road, and it turns out they’re not all that infrequent, but you have to be able to handle all of them,” Mr. Salesky said. “With radar and high-resolution cameras and all the computing power we have, we can detect and identify the objects on a street. The hard part is anticipating what they’re going to do next.”

Mr. Salesky said Argo and many competitors had developed about 80 percent of the technology needed to put self-driving cars into routine use — the radar, cameras and other sensors that can identify objects far down roads and highways. But the remaining 20 percent, including developing software that can reliably anticipate what other drivers, pedestrians and cyclists are going to do, will be much more difficult, he said.

A year ago, many industry executives exuded much greater certainty. They thought that their engineers had solved the most vexing technical problems and promised that self-driving cars would be shuttling people around town in at least several cities by sometime this year.

Waymo, which is owned by Google’s parent company, Alphabet, announced that it would buy up to 62,000 Chrysler minivans and 20,000 Jaguar electric cars for its ride service, which operates in the Phoenix suburbs. General Motors announced that it would also start a taxi service by the end of this year with vehicles, developed by its Cruise division, that have no steering wheels or pedals.

Captivated by the notion of disrupting the transportation system, deep-pocketed investors rushed to get a piece of the action. Honda and the Japanese tech giant SoftBank invested in Cruise. Amazon, which hopes to deliver goods to its shoppers by driverless vehicles, invested in Aurora, another start-up in this area.

“There was this incredible optimism,” said Sam Abuelsamid, an analyst at Navigant Research. “Companies thought this was a very straightforward problem. You just throw in some sensors and artificial intelligence, and it would be easy to do.” 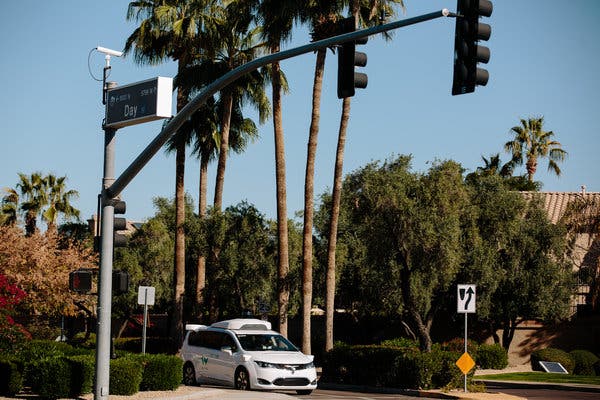 A Waymo autonomous vehicle in December in Chandler, Ariz. The company has a fleet of about 600 test vehicles, about as many as it had last year. Credit Caitlin O’Hara for The New York Times

The industry’s unbridled confidence was quickly dented when a self-driving car being tested by Uber hit and killed a woman walking a bicycle across a street last year in Tempe, Ariz. A safety driver was at the wheel of the vehicle, but was watching a TV show on her phone just before the crash, according to the Tempe Police Department.

Since that fatality, “almost everybody has reset their expectations,” Mr. Abuelsamid said. It was believed to be the first pedestrian death involving a self-driving vehicle. Elsewhere in the United States, three Tesla drivers have died in crashes that occurred while the company’s Autopilot driver-assistance system was engaged and both it and the drivers failed to detect and react to hazards.

Companies like Waymo and G.M. now say they still expect to roll out thousands of self-driving cars — but they are much more reluctant to say when that will happen.

Waymo operates a fleet of 600 test vehicles — the same number it had on the road a year ago. A portion of them are the first set of vehicles it will be buying through the agreements with Chrysler and Jaguar. The company said it expected to increase purchases as it expanded its ride service.

“We are able to do the driving task,” Tekedra Mawakana, Waymo’s chief external officer, said in an interview. “But the reason we don’t have a service in 50 states is that we are still validating a host of elements related to offering a service. Offering a service is very different than building a technology.”

G.M. declined to say if it was still on track to start a ride service “at scale” this year, as it originally planned. Its chief executive, Mary Barra, told analysts in June that Cruise was moving “at a very aggressive pace” without saying when commercial operations would begin.

China, which has the world’s largest auto market and is investing heavily in electric vehicles, is trailing in development of self-driving cars, analysts say. The country allows automakers to test such cars on public roads in only a handful of cities. One leading Chinese company working on autonomous technology, Baidu, is doing much of its research at a lab in Silicon Valley.

Tesla and its chief executive, Elon Musk, are nearly alone in predicting widespread use of self-driving cars within the next year. In April, Mr. Musk said Tesla would have as many as a million autonomous “robo taxis” by the end of 2020.

Tesla believes its new self-driving system, based on a computer chip it designed, and the data it gathers from Tesla cars now on the road will enable the company to start offering fully autonomous driving next year.

But many experts are very skeptical that Tesla can pull that off. 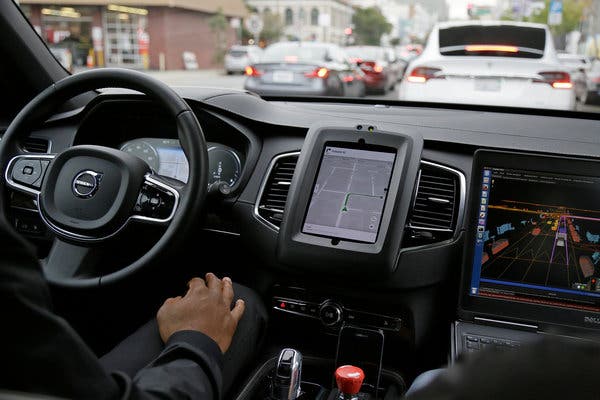 An Uber driverless car on a test drive in 2016 in San Francisco. Since one of the company’s self-driving test cars hit and killed a pedestrian in Arizona last year, industry expectations have changed. Credit Eric Risberg/Associated Press

Mr. Salesky said it was relatively easy to enable a car to see and identify obstacles on the road with the help of radar, cameras and lidar — a kind of radar that uses lasers — as well as the software and computing power to process images and data.

“If you’re out driving 20 hours a day, you have a lot of opportunities to see these things,” Mr. Salesky said.

Equally challenging is teaching self-driving cars the finer points of driving, sometimes known as “micro maneuvers.” If a vehicle ahead is moving slowly looking for a parking space, it is best to not follow too closely so the car has room to back into an open spot. Or to know that if a car is edging out into an intersection, it can be a sign the driver may dart out even if he doesn’t have the right of way.

The technology is available now to create a car that won’t hit anything. But such a car would constantly slam on the brakes.

“If the car is overly cautious, this becomes a nuisance,” said Huei Peng, director of Mcity, an autonomous-vehicle research center at the University of Michigan.

Some companies argue that the way to get more self-driving vehicles on the road is by using them in controlled settings and situations. May Mobility operates autonomous shuttles in Detroit; Providence, R.I.; and Columbus, Ohio. These are not minivans or full-size cars but six-passenger golf carts. They travel short, defined routes at no more than 25 miles per hour. In many cases they provide public transportation where none is available.

“A vehicle that needs to go at higher speeds will need more expensive, more exotic sensors,” said Alisyn Malek, the company’s chief operating officer. “Using a low-speed vehicle makes the task of operating an autonomous vehicle easier, so we can use what works in the technology today. 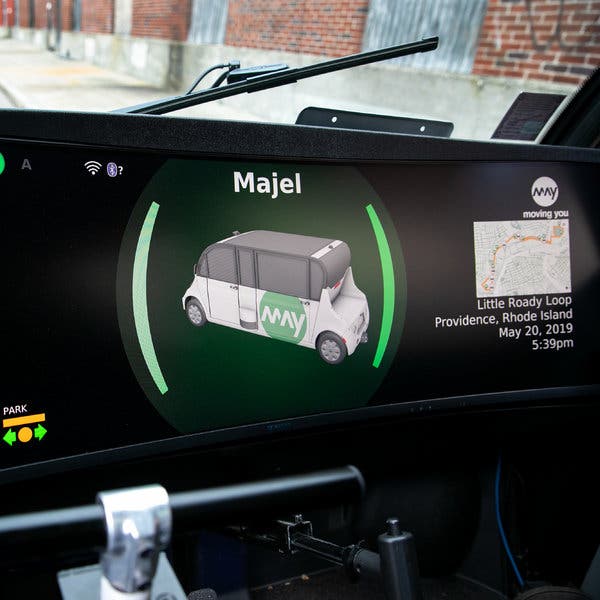 The dashboard of a May Mobility autonomous shuttle, which the company operates in Detroit; Columbus, Ohio; and Providence, R.I. Credit Kayana Szymczak for The New York Times 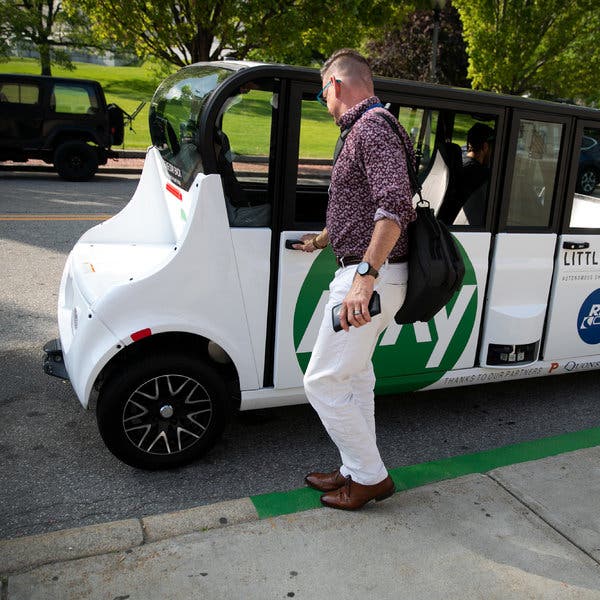 John Jay Alves boarding a May Mobility shuttle at one of 12 stops on a loop in Providence. Credit Kayana Szymczak for The New York Times

The company has been running six shuttles between the Providence train station and Olneyville, a growing neighborhood a few miles away, since May. The trial is backed by the Rhode Island Department of Transportation, which is paying May Mobility $800,000 for the first year of service. The company expects to take its service to Grand Rapids, Mich., this year, in a partnership led by the city. Based in Ann Arbor, Mich., May Mobility has raised $33 million from investors, including a $10 million round led by Toyota and BMW.

Also this year, a Boston start-up, Optimus Ride, plans to begin operating driverless shuttles at the Brooklyn Navy Yard that also travel at 25 m.p.h. or less.

Ms. Malek said she believed it would take years and perhaps even a decade or more to develop driverless cars that could travel anywhere, any time.

“Our focus is, how can we use the technology today?” she said. “We realize that today we have to start somewhere.”

Looking to join a solid team that keeps you on the job, offers flexible driving options and has your back? Start started by appling online now!